The Irony of the Rainbow

By Rob June 28, 2015
This week marked a few landmark decisions from the Supreme Court. They demonstrated unquestionably that that rule of law has ended in the United States, that the opinion of a majority of justices is sufficient to replace the Constitutional law of the land with society's current view of what is right and good.

One of those decisions was the ruling that gay marriage is now a right protected by the federal government. Many, including myself, view this as a turning point in our nation. However, I feel my reasoning is probably different to most.

Homosexuality is a sin. However, I personally am not aware of anytime where God said it was the one sin that all Christians should be fighting against. After all, we are all sinners. What makes the sin one person struggles with greater than the sin another is tempted with? I will not judge my homosexual brothers and sisters, because I cannot afford for them to judge me.

So why is the court ruling such a big deal? Many, including myself, believe that God's judgments will very shortly fall on this country, and that this may very well be the straw that broke the camel's back. For me, it is not about which sin has been embraced. It is about the fact that sin has been embraced.

Since the 1970s, the United States has committed millions of abortions. 53 million, to be exact. I am of the opinion that most if not all of these acts are murder. Unlike homosexuality, God has indicated the gravity of murder. What sin is greater? So, since the 70s the US has murdered the equivalent of 1/7th of today's US population, and yet God has not destroyed it. Why not? Despite the ubiquity of abortion, it is not embraced. There are many who oppose it, and very few who publicly flaunt it. Almost no one in the United States would brag about having an abortion. It has a negative connotation. It is seen as dodgy, even by those who do it. They seek to hide it. It is embarrassing. They have not totally thrown out the light of Christ, because they at least implicitly acknowledge it is not appropriate by keeping it private.

We live at a time when this generation readily identifies what they consider to be mistakes in the moral code of their ancestors while assuming the current opinions of society (which are markedly different from just 10 years ago) are eternally true. What absolute hubris.

The dialogue of those who support it make it a moral issue. In other words, if a person supports homosexuality, they are good. If they do not, they are bad.

God said,  "Woe unto them that call evil good, and good evil; that put darkness for light, and light for darkness; that put bitter for sweet, and sweet for bitter!" (Isaiah 5:20). Is this not exactly what is happening in our day?

What will be the consequences of our twisting society's moral bearings? The greatest consequence is that the only innocents among us--children--will be raised with a perverted sense of right and wrong that prevents them from making correct moral decisions. This toxic moral environment voids the purpose of creation. Whenever a society reaches the point where they openly embrace sin and invert the moral compass, God intervenes and destroys them in order to restore an environment where it is possible for people to learn to distinguish between good and evil.

Isaiah prophesied that our society would come to the point where we would, like Sodom, flaunt our sins and openly advertise them as badges of our "righteousness":
"8 Jerusalem will falter and Judea fall because their tongue and their actions are contrary to Jehovah, an affront to his glory before his very eyes.
9 The look on their faces betrays them: they flaunt their sin like Sodom; they cannot hide it. Woe to their souls; they have brought disaster upon themselves!" (Isaiah 3, Gileadi Translation)

We recall what happened to Sodom.

And what about the flood?

"5 ¶And God saw that the wickedness of man was great in the earth, and that every imagination of the thoughts of his heart was only evil continually.
11 The earth also was corrupt before God, and the earth was filled with violence.
12 And God looked upon the earth, and, behold, it was corrupt; for all flesh had corrupted his way upon the earth.
13 And God said unto Noah, The end of all flesh is come before me; for the earth is filled with violence through them; and, behold, I will destroy them with the earth." (Genesis 6)

People today mistakenly think that an evil person knows what they are doing is wrong. Hitler, the archetype of evil, really seemed to believe what he was doing was the right thing to do. And so it is. Evilness is not a disease of choice, it is a disease of understanding. Jesus railed and railed against the Pharisees, and yet they were unquestionably devout, in their minds, to God. Jesus explained this paradox by saying that they would think they were doing God a service by killing his messengers. 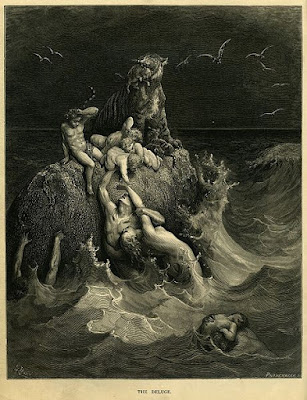 I love this picture because it shows that even wicked people still have standards. There is a parent trying to save a child, and a tiger trying to save its cub. Wicked people almost never realize their condition. They would not self-describe as evil. They have standards, they are just different from God's standards. More than being a reason not to send the flood, this was the very reason the flood was sent. When a people has replaced the internal moral compass God has given each of us with the false traditions we inherit from society, we are ripe for destruction because we deprive the innocents among us from making the right decision. We have drowned their capacity to choose right with our incessant lessons that bad is good and good is bad.

In Noah's day, just like in our day, the disease of understanding is pervasive. "Corrupted" is a very apt term to use to describe the situation. And violence, though not the best fitting word in our modern usage, perfectly describes the vehement activism we see in those who are pushing the new morality, when we look at historic meanings of the word:

After the flood, Noah made a sacrifice and God made a covenant:
21 And the Lord smelled a sweet savour; and the Lord said in his heart, I will not again curse the ground any more for man’s sake; for the imagination of man’s heart is evil from his youth; neither will I again smite any more every thing living, as I have done.
22 While the earth remaineth, seedtime and harvest, and cold and heat, and summer and winter, and day and night shall not cease. (Gen 8)

It is interesting that the rainbow, the sign of the covenant God made to Noah promising him not to destroy the world's population, has been co-opted by the homosexual movement. In the wake of the court decision, facebook is awash with profile pictures that have been covered with the rainbow. Could a more mocking gesture be conjured?  "Their tongue and their actions are contrary to Jehovah, an affront to his glory before his very eyes." (Isaiah 3:8)

Does the rainbow covenant preclude God destroying us for our wickedness, which has exceeded Sodom and Gomorrah? Importantly, God did not unconditionally promise not to destroy humanity. He merely said that while the earth remains, and seedtime and harvest, and seasons, and day and night, he would not kill every living creature. Joseph Smith taught that there will come a time, preceding Jesus' return, that all of these things would indeed cease, and God's destruction will be poured out upon the earth. However, as long as the rainbow appears in the sky, we can know that these norms will continue for at least the present year.

"While enquiring of the Lord concerning the End of time, it was made known to him by the Holy Spirit, that there should be prosperity, seed time and harvest every year in which the Rainbow was seen, for to that was Noah refered as a surety on this subject,— But in the year when the Bow was not to be seen, would commence desolation, calamity and distress among the Nations, without seed time or harvest." (Joseph Smith, March 10, 1844)