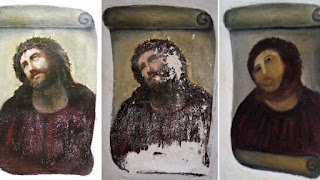 Many have asked me what the cover of "Teaching for Doctrines the Commandments of Men: Tradition in Modern Mormonism" (free pdf) means.

This images are from a fresco painted on the wall of a church in Spain. The leftmost image is the original, a representation of the Savior. The second image shows what it looked like after many years of degradation. The last image is what it looked like after a local attendee of the church decided that she wanted to fix the portions of the painting that had flaked off.

Consider the parable: Someone with a clear vision created the representation of the Savior through their gifts. Those who followed did not have the same gifts as the artist, and/or neglected the task of remembering and caring for what had been given. The world has a way of degrading things. As the paint flaked off, enough remained to give an idea of what had been revealed, but upon inspection many of the details were lost. Eventually, someone without the original vision or gifts decided they would fill in the blanks. In the process, they not only incorrectly filled in the blanks, but they destroyed what little remained of the original picture.


This parable has a lot more meaning and detail than can or should be conveyed by me textually. If you struggle to fill in the blanks (pun intended), read the book (free pdf).